the 'can do' spirit

Let the image talk for a brief introduction. You can also click on the image. 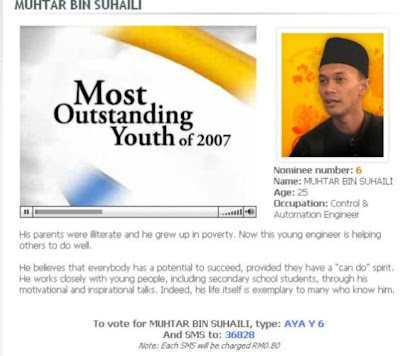 Most Outstanding Youth award, it wasnt my first time heard about this award, but for this year i am very impressed to see our Muslim brother, Muhtar Suhaili, being as one of the shortlisted nominees, the one and only Muslim candidate. Well, i did not realized about this until my father showed me the AYA Dream Malaysia Award 2007 website.

Graduated from IIUM in Mechatronic Engineering, now he serve as a Control & Automation Engineer for Sarawak Shell Berhad, Miri. Being as the President of IIUM Students’ Representative Council year 2003/04 during his undergraduate study, i believe he had given the best he could to the Muslim community in IIUM.

Born in poverty might be the spirit booster for him to prove that he could be success in life, associated with the hopes from the family. Due to the life experience, he is not hesitate to give out motivational and inspiring talks to the young people as well as his life himself being as the exemplary for others. I do think that young people is the most right person to be emphasized with positive input, to know that they were at the level which easily could be touch by a sincere heart and inspiring words.

Not knowing him personally, but viewing at his blogging life already put me in a very inspiring state to go on with my aim to be as one of the Muslims' contributer, with what i have now and inshaAllah with what i will established in the future to come, Yayasan Raudhah, inshaAllah, ameen.

And only Allah who always knows best.

for the three birthday cakes (last 5th aug 07), i thank you guys in advanced, thanks for the loves and supports..

from the person that i loved most

from sky and cha

and thanks for the celebration, four times ~_^


And only Allah who always knows best 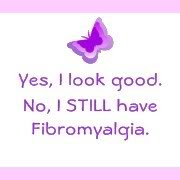